This year’s Harlem Children’s Theatre Festival was a huge success, mostly in part to our dedication, talented and innovative Master’s candidates! Here is a little discussion from a few who participated in the event.

This year marked the third time I was a part of The Harlem Children's Theatre Festival (formerly Family Arts Day). It was very exciting to take the event in a new direction this year, which made the three live theatrical performances shine as the festival centerpiece. Theatre is a collaborative art form, and I have enjoyed participating in the group-driven process to make the event possible. The talents and resourcefulness of my peers in the Graduate Program in Educational Theatre at the City College of New York, under the visionary leadership of Jennifer Katona and Sobha Kavanakudiyil, make the “magic” happen.   From the initial stages of planning through the event execution and clean up, the process has showed me the power of surrounding myself with like-minded people who share my passion for theatre and the arts. An essential part of being an arts educator is learning how to be an arts advocate, and bringing one’s artistic vision to reality for the communities you serve. Being a part of the festival has allowed me to participate in the extraordinary process of creating theatre for young audiences and inspiring a new generation that will benefit in learning about themselves and developing empathy for those around them in a way that only theatre can provide.
-Lauren Adler 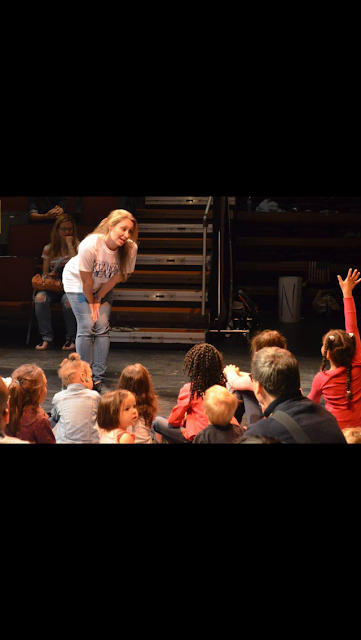 Assistant producing the Harlem Children’s Theatre Festival was such an amazing learning experience.  Though I have directed and produced various and sundry children’s theatre shows over the years, I had never produced a festival like this, juggling volunteers, donations, activities, publicity and multiple shows.  I have to say that though I was brought on to make our fearless leader Sobha’s life easier, she made it pretty easy for me, walking me through the steps and supporting me, always with grace and patience.  My co-assistant Lauren was another huge asset, since she was involved with the festival last year when it was Family Arts Day, filling in the blanks and giving sage advice.  I especially loved coordinating the Creative Play Workshops for young children and their families that led up to the festival.  It was such a joy to watch the community come together in the intimate setting of a small workshop, watching some of our wonderful teachers-to-be practice their art, igniting joy and wonder in young children.  It was no surprise that that joy and wonder were multiplied times a thousand at the Harlem Children’s Theatre Festival.  So many little ones were exposed to the beauty of theatre for the first time that day.  So many families engaged with the arts and their community dynamically, in a way they never had before.  This festival gave me the opportunity to bridge Educational Theatre volunteers with the families and children of our neighborhood, making beautiful connections through the many aspects of theatre.  I cannot wait to continue to bridge those connections, and I definitely cannot wait till next year for the second annual Harlem Children’s Theatre Festival.
-Meredith Smart

One of the greatest lessons I’ve learned during my time in the Educational Theatre program at CCNY is the importance of building ensemble whether it is in our classrooms or our community.  The Harlem Children’s Theatre Festival is a prime example of this. It took an ensemble from the CCNY community to produce a festival of this magnitude that could bring together so many families from the NYC community for the purpose of celebrating the arts and families experiencing art together.   The process began for me last semester as I watched this script evolve from a brainstorming idea to a fully realized play.  Working on this project allowed me to share my artistry as a director with my fellow graduate students and I got to witness their acting talents shine as they shared this wonderful story with the children and families who attended the festival.  As our performance began I stood there and watched the audience enter the world of Harry the Dog and I saw their delight as Harry and his friends and family traveled through the story.  It was the first exposure to live theatre for many of the children and what an honor it was to be able to share this story and the beauty of live theatre with them
-Jeff Seabaugh

As an artist, I am a story teller, and the Harlem Children's Theatre Festival reminded me that the stories created in the theatre can bring joy to both children and adults. As an actor, I was captivated by how invested audiences were in the stories we created on stage. Children have an honesty that they bring to a theatre piece and after all, the audience is the final character in the story. Finally, this festival allowed families to come together to enjoy storytelling without looking at a screen or phone.  The audience and the actors were experiencing something together. As an actor, I was able to actively respond to the audience which enhanced my experience and shaped the story that was told.  Through laughter, song, and movement, something magical was created through this theatrical experience, and I could see that magic spark in many of the eyes of the young audience members. I am excited to see how this festival grows in years to come.
-Patrick McGee

I worked as tech support for the Harlem Children Theatre’s Festival, and I really enjoyed the opportunity to collaborate with my Educational Theatre classmates as artists! I spent most of my time with Busy Bea and The Sixth Borough, which I felt served as excellent complements to each other. While one was a story about nature and the other was about the city, each story fostered appreciation and excitement for our surrounding environment—whether it was for the wonders of bees or the intrigue of  New York City. This festival was also a fantastic opportunity to see in action the positive impact that the Educational Theatre program has on its community. I’m looking forward to more artistic collaborations with my CCNY colleagues!
-Hannah Johnson-Walsh 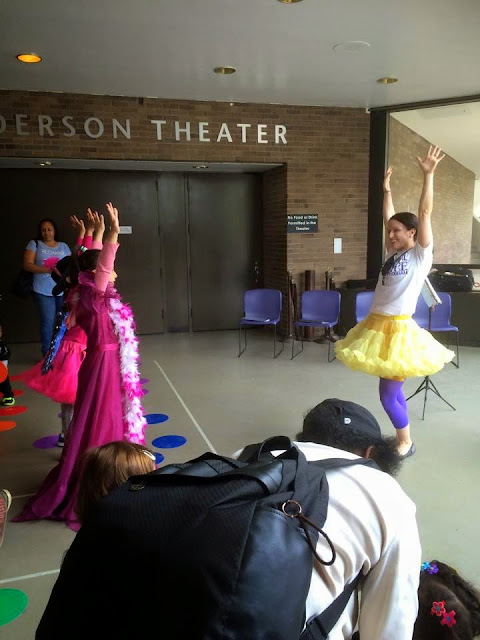 Last year I had the opportunity to co-write and direct a Theatre For Young Audiences piece for Family Arts Day entitled Yuki and the Elephant. This work, which was developed in the Educational Theatre Program's TYA course, premiered at Family Arts Day and went on to tour in public schools last fall. Working on that production not only provided an opportunity to build essential skills needed in the field, but it also gave me a chance to reconnect to my artistry as a director and choreographer.

When Sobha announced Family Arts Day would be re-branded the Harlem Children's Theatre Festival this year and would premiere three original shows, I looked forward to seeing how the event would grow and change. I was blown away by the high level of creativity and dedication poured into every aspect of this year's event. It was a huge success, and the TYA pieces were clever, joyful, well designed, and poignant. Although I was unable to participate in the shows this year, I had a blast leading sing-a-longs with my hot pink guitar in between each performance! The costume photo booth was an extra special treat, and I loved singing with the kids as they paraded about the space in tutus, hats, wigs, fairy wings, and other colorful attire!

I am extremely proud of everyone involved for dedicating themselves to providing entertaining and educational experiences for families in the Harlem community, and look forward to the continued growth and success of this event!

When Mari Martinez and I wrote the first draft of Busy Bea in our Theatre for Youth and Young Audiences class in Fall 2014, the concept was a little different. The original script included shadow puppetry and "normal" staging, but in the nature of wanting to expose the talents of our actors, as well as our interest in the performing for the very young--the audience we knew we would have at the HCTF, Busy Bea looked quite different in production. Shadow puppets became actual hand puppets, and the staging became interactive--children sat in the center and the action happened in 4 small different sets that surrounded them. It was fabulous first hand experience in the importance of being flexible and working with what you have in children's theatre.  It truly turned out for the best.
It has been an absolute honor to be able to watch our seed of an idea grow into a full blown production. I could not have been more proud of my cast and crew, and the audience feedback was overwhelmingly positive. I can't wait to continue with this project in the fall in the Readings on the Road series.
-Kim Ceccotti
Posted by The Graduate Program in Educational Theatre at The City College of New York at 11:53 AM